To recognize an Administrative/Professional and/or Civil Service Staff employee who has demonstrated excellence in their performance at Southern Illinois University Carbondale. 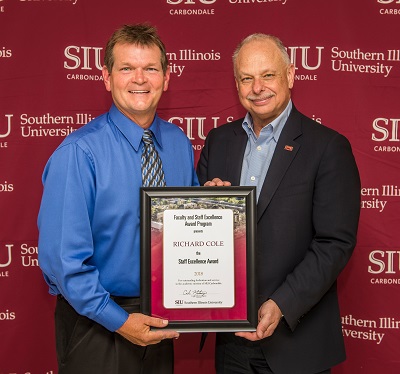 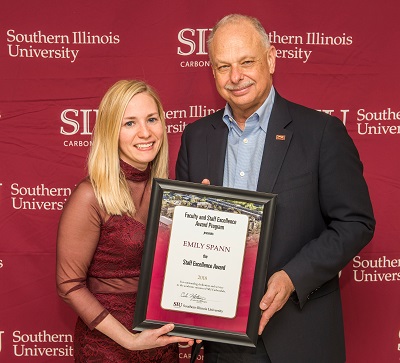 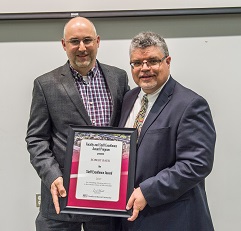 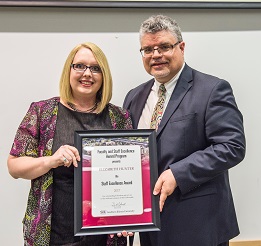 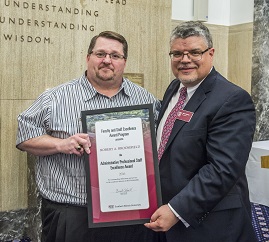 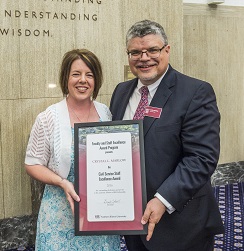 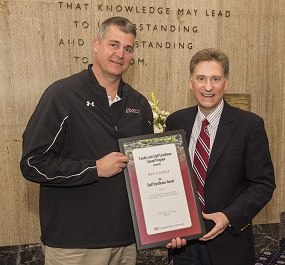 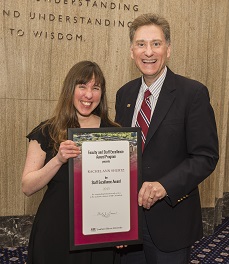 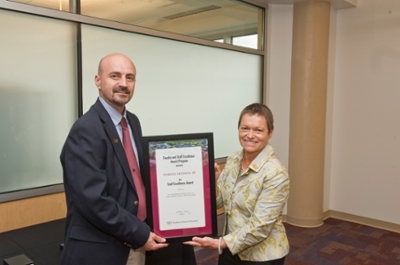 2014: Harvey Henson, Jr., the assistant dean for recruitment, retention and outreach in the College of Science, impacts SIU students through outreach with Living Learning Communities, the popular Saluki Science Ambassadors and science educators throughout the region, writes Laurie A. Achenbach, interim dean of the College of Science.  He has mentored more than 350 student leaders and undergraduate researchers with Saluki Science Ambassadors since 2009 and 300 science students in science learning communities since 2008.

Henson has more than 27 years with the university, beginning as a research project specialist in 1986 to help establish the seismology research program in the Department of Geology.  In 2001, Henson became an instructor in geosciences and in 2007, co-director and instructor in the science and math teacher (SMART) graduate program in the College of Science and College of Education and Human Services.  Henson became an assistant dean in 2008.  Since becoming an assistant dean, Henson is the principal investigator or co-principal investigator in outreach grants totaling more than $8 million.

“All of these activities lie outside his specific job responsibilities,” Achenbach writes.  “Harvey does all of the grant-funded outreach not because he has to, but because he wants to.”

Stephen Esling, geology department chair, writes that Henson’s educational outreach programs result in many students entering SIU as science majors and notes that everyone who works in science education in the region “knows Harvey and what he does.”

“It is a true joy to watch Harvey interact with students and all educational levels. You can see the passion he has for learning and how he reaches out to that reluctant student to show him or her just how exciting science can be,” Esling writes. 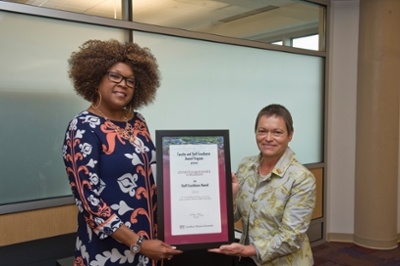 A two-degree SIU graduate and Carbondale native, Coleman, affectionately known as “Mama Z,” mentors students, has advised several registered student organizations, and established two private scholarships in memory of her grandparents, three of whom retired from the university.  Harvey, an accountant in the registrar’s office, writes that she first met Coleman when she hired her as a graduate student for her office nearly 20 years ago.

Coleman’s “natural affinity” for students developed while working as a Chicago-based admissions counselor and recruiter for SIU from 1997 to 1999, Harvey writes.

Coleman has a desire to increase the diversity of student and faculty membership in the University Honors program to reflect the diversity on campus, and through active and intentional recruitment, diversity in the program has risen from 10 to 35 percent in just over three years, Harvey writes.  Coleman is a university associate for the honors program’s Living Learning Community (LLC), taught a University College 101 class and served on numerous search committees.  She is vice president of the black staff and faculty council and the administrative/professional council’s judicial review committee.

Coleman is president of the African American Museum of Southern Illinois and also serves as a family action network committee member for Special Olympics Illinois. 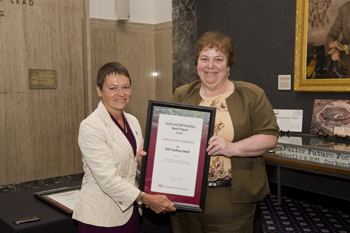 2013: Rosemary E. Simmons, director of the SIU Counseling Center, “embodies the culture she has created of excellence, acceptance and integrity,” writes Jaime Clark, the Center’s assistant director and director of training.  Among Simmons’ numerous qualities is she is “passionate about student welfare, promotes inclusive excellence” and is “tireless in striving for an equitable campus environment,” Clark states.

Simmons has more than 25 years experience at the Counseling Center in a number of capacities, including serving as director since 2006.  Prior to coming to SIU Carbondale, Simmons’ experience included working as a crisis counselor for the Jackson County Mental Health Center, a sexual assault crisis counselor at the Women’s Center, and victim’s advocate with SIU Carbondale’s Women’s Services.  She earned the University’s Administrative/Professional Women of Distinction Award presented by University Women’s Professional Advancement in 2004.

Frank Kosmicki, chief psychologist at the Counseling Center, writes Simmons is frequently a first-responder during crises or emergencies, meeting with students, staff, faculty and parents at the counseling center, residence halls, the hospital, or wherever needed.   Even with the responsibilities and working long hours, Simmons’ “optimism and positive attitude are infectious, and much of the character of the Counseling Center can be attributed to her personality,” Kosmicki writes. 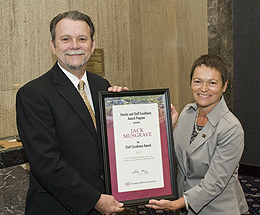 2012: Jack R. Musgrave, interim director of the Evaluation and Developmental Center, is "a consummate professional, and as a role model for students, sets an excellent example through his extensive vocational rehabilitation knowledge and hard work," writes Carl R. Flowers, professor and acting director of the Rehabilitation Institute in the College of Education and Human Services. 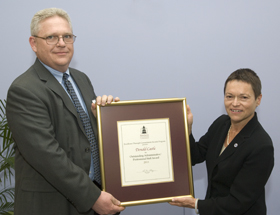 2011: Don Castle, assistant director of the Student Center, for his outstanding contributions to the facility's central role in the life the University's students. The award is part of SIUC's annual Excellence Through Commitment Awards program, which highlights top achievers at the University.

2010: Carol Westerman-Jones is an academic adviser for the Department of Cinema & Photography in the College of Mass Communication & Media Arts. She joined the University in 1993 as an admissions and records officer with academic support programs. She has been in her current position since 1997. Westerman-Jones, of Carbondale, earned a bachelors degree in art and a masters degree in cinema and photograph at SIUC in 1992 and 1997, respectively. 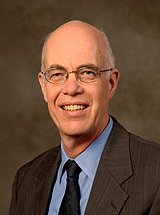 2009: John S. Mead has served as director of the Coal Extraction and Utilization Research Center since 1989. In that position, he oversees the operation and strategic direction of the center, including specialized development facilities. Also associate dean of the graduate school, Mead promotes SIUC nationally and internationally as a leader in coal research while providing expertise to private and public organizations. He also helped Illinois attract the federal FutureGen project to Mattoon. 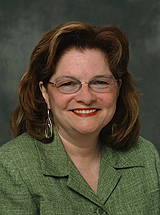 2008: Carmen Suarez is the director of the Office of Diversity and Equity. A member of the Universitys staff since 1990, her previous roles included serving as coordinator of the Office of Diversity and Equity, interim assistant vice chancellor for enrollment management, assistant dean of the School of Law Career Services, Hispanic community liaison and affirmative action officer. She earned her bachelor's degree in history, her master's degree in medieval history with a minor concentration in ancient history and her doctorate in philosophy at SIUC. 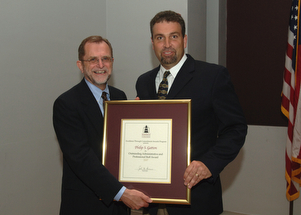 2005: Lois Strom, assistant to the chairman, Department of Surgery, School of Medicine- Springfield 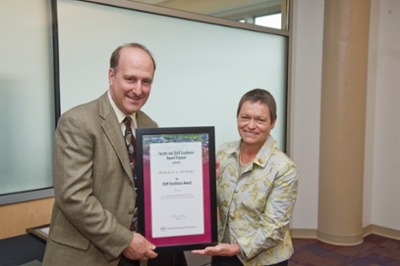 2014: Ronald A. Dunkel, is coordinator of the Student Center Craft Shop and is often found, according to Tena Bennett, Student Center director, “in the middle of all the classes, workshops and fun that goes on at the Craft Shop every day.”

Dunkel has been craft shop coordinator since September 1994; he began at the university in 1985 as the assistant craft shop coordinator, wood shop manager and instructor. Through more than 50 annual workshops and private lessons, Dunkel and his team “have created an opportunity for everyone to find their inner artist,” Bennett writes.

Dunkel is heavily involved in everything from a hand-carved casting of an SIU Saluki gnome to teaching a class on how to make sushi, build a kayak or help students fix their bikes through “Saluki Spokes.” He also works with various community groups including the Girl Scouts, Rainbow’s End, Carbondale Boys and Girls Club and numerous campus-related organizations, Bennett writes.

Don Castle, Student Center associate director, writes that Dunkel is focused on students’ learning, success and wellbeing and “continues to motivate and educate students about the benefits of being productive and becoming involved in their chosen profession.”

Kay Pick Zivkovich, professor and associate director in the School of Art and Design, writes that Dunkel inspires people on a daily basis to “become more aware of themselves through the creative process.” 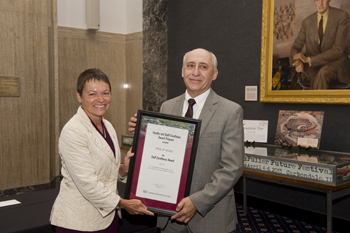 2013:  Philip Reed , or “Chef Phil,” the chef production manager for residence hall dining with University Housing, makes the “culinary experience of SIU students a truly great experience.”  But that is just one of his attributes, writes Darrell Porter, a housing maintenance inspector.

Working for University Housing since 1992, Reed works at Trueblood Hall, the largest dining hall on campus. He is responsible for approximately 6,000 meals per week to an average of 900 students each night, and oversees more than 30 kitchen staff, and more than 100 students. Known for his monthly dining hall theme meals, Reed earned a national award in 2010 from the National Association of College and University Food Services for his theme meal, “A Night in New Orleans.”

Debra J. Nesbitt, a food production manager, also writes that Reed, through research and trial, “came up with menu adaptations that allowed a variety of choices for students who thought Celiac Disease would limit forever.”

“His due diligence in formulating recipes, preparation methods, staging areas, and staff training has made a significant impact on our ability to recruit students with allergy and intolerant conditions,” she writes.  She also notes Reed was instrumental in determining menus and food production in the aftermath of the May 8, 2009, wind storm that occurred in the midst of spring semester finals and anticipated commencement ceremonies.  She writes that the staff served lunch to 3,500 patrons daily May 8-12, 2009.

Reed also provides hands-on training for students in the University’s Food and Nutrition program; is involved with the University’s Iron Chef competitions, and numerous community outreach programs.  That includes raising donations for a homeless shelter in the St. Louis area; donations for special education students in Cairo, and volunteering with Habitat for Humanity.

2010-2012: Patricia Caporale, administrative assistant to the admissions director at the SIU School of Law, has been the "backbone of the law school's recruitment and retention mission" since her start there in 1988, writes Alice M. Noble-Allgire, law school professor. 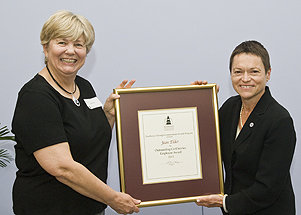 2010-2011:  Jean Elder, who is the office manager for the Department of Radio-Television, is the administrative assistant to the department chair. Her responsibilities include keeping track of the department's business and financial accountings, but colleagues say Elder plays even a more pivotal role within the department and the College of Mass Communication and Media Arts. 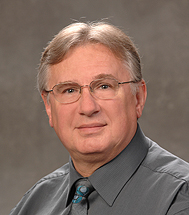 2009-2010:  Clarence E. “Clancy” White is an arena technician at the SIUC Student Center. He joined the University in 1998 and is responsible for sound at the many events held at the facility, as well as events held outside and off-campus. White, of Du Quoin, also repairs and maintains sound and video equipment and is a back-up technician for other major campus facilities, such as Saluki Stadium, Shryock Auditorium and the SIU Arena. 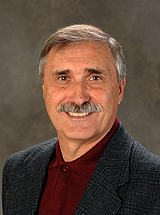 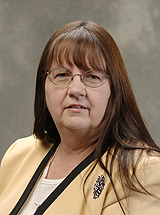 2007-2008 : Karen Gibson came to SIUC in 1976 as a central sterile supply technician and then moved on to work in General Stores and Physical Plant Services. In 2000, she became the storekeeper in the Department of Zoology, where she has garnered praise from co-workers, faculty and students. 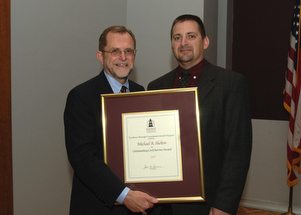 1984 : Jacqueline Goepfert, staff secretary, Center for the Study of Crime, Delinquency and Corrections

1981: Barbara Peterson, secretary to the dean, College of Education